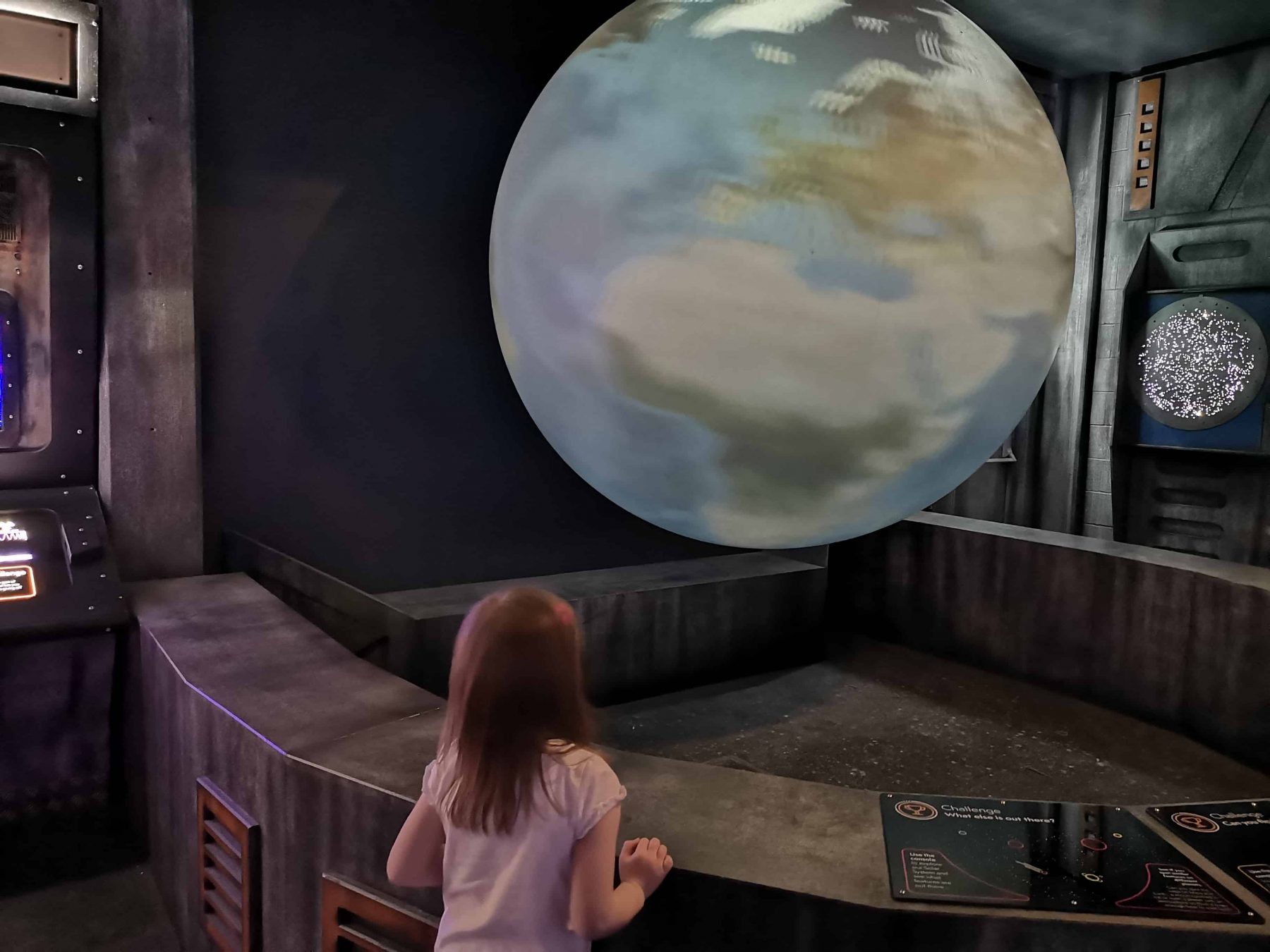 What better way to celebrate British Science Week than with a first time trip to Winchester Science Centre and Planetarium. We only live around 20 minutes away from the centre and although we live so close, we had never thought to venture there so we made it happen on Saturday!

We wanted to make the most of our trip so we planned to arrive for opening, some of the reviews I’d read beforehand mentioned that it can get really busy and I wanted to be sure of a parking space and minimal stress.  Arriving on time didn’t happen [why change the habit of a lifetime?] but we did get there half an hour after opening – so I’m getting better! There was plenty of parking and just a short stroll from the entrance too – we were off to a great start. (Parking does cost £2 for the day which I thought was a bit of a cheek, but…Winchester. The machine takes card or cash)
Upon walking into the centre I was shocked by just how much there was to see and do – the kids didn’t know where to go first, they were in a complete ‘hands on’ frenzy! 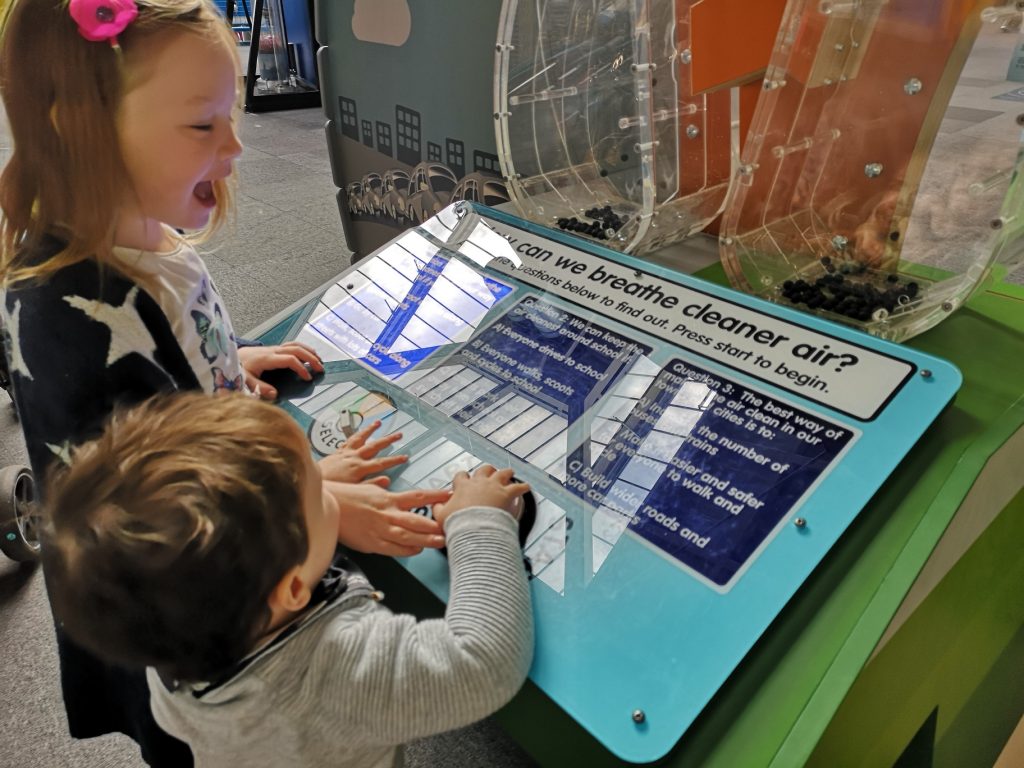 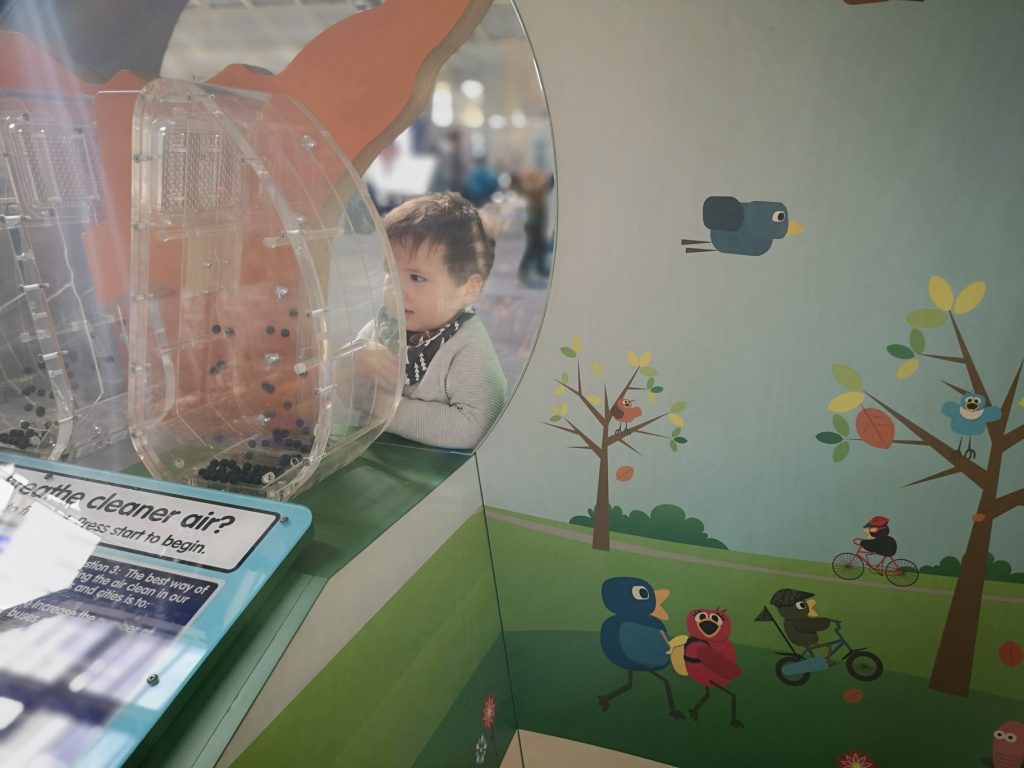 The ‘upper deck’ was full of exhibits; some of our favourites in the Sports Zone were wheelchair basketball, the highest jump, race track, how high can you make the tennis ball fly into the sky – and of course the all important winners podium! 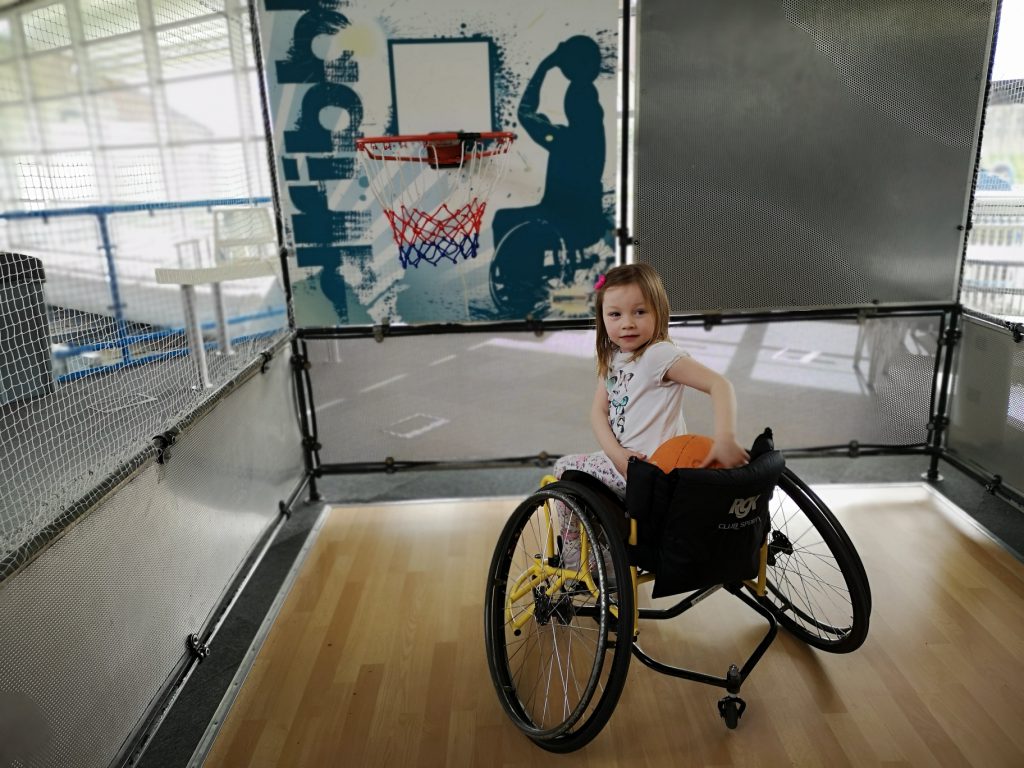 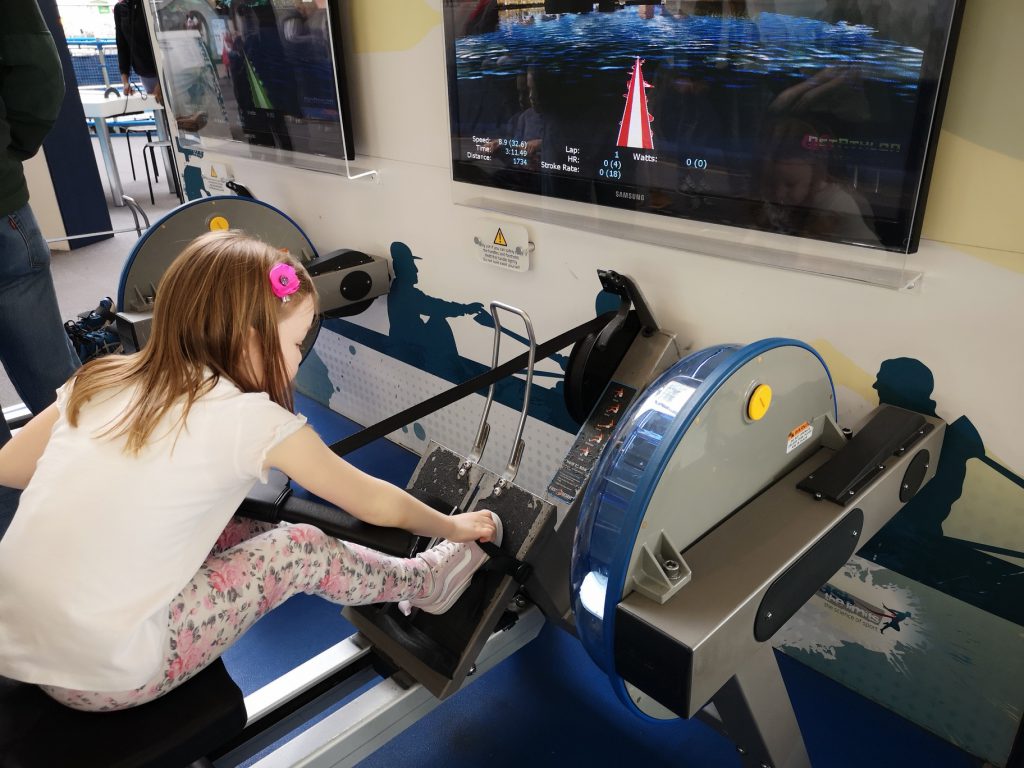 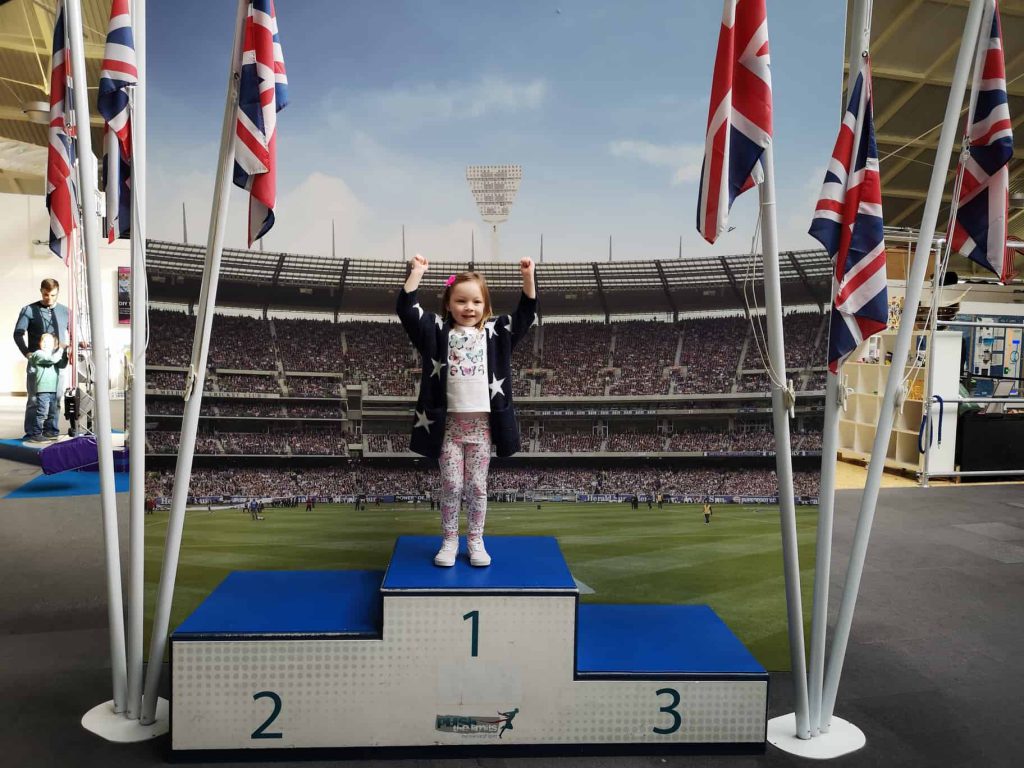 We bounced balls into holes, built bridges, learnt all about electricity, drew ourselves in mirrors (so much harder than you think!) and ‘The Colon Cafe’ where you print your ‘order’ on a ticket before journeying through the colon, scanning your order at different checkpoints, you get to feel different poos (and we all know how much kids LOVE poo) and finally, just as you leave you get to see if your order leads to a fart noise to send you on your way! 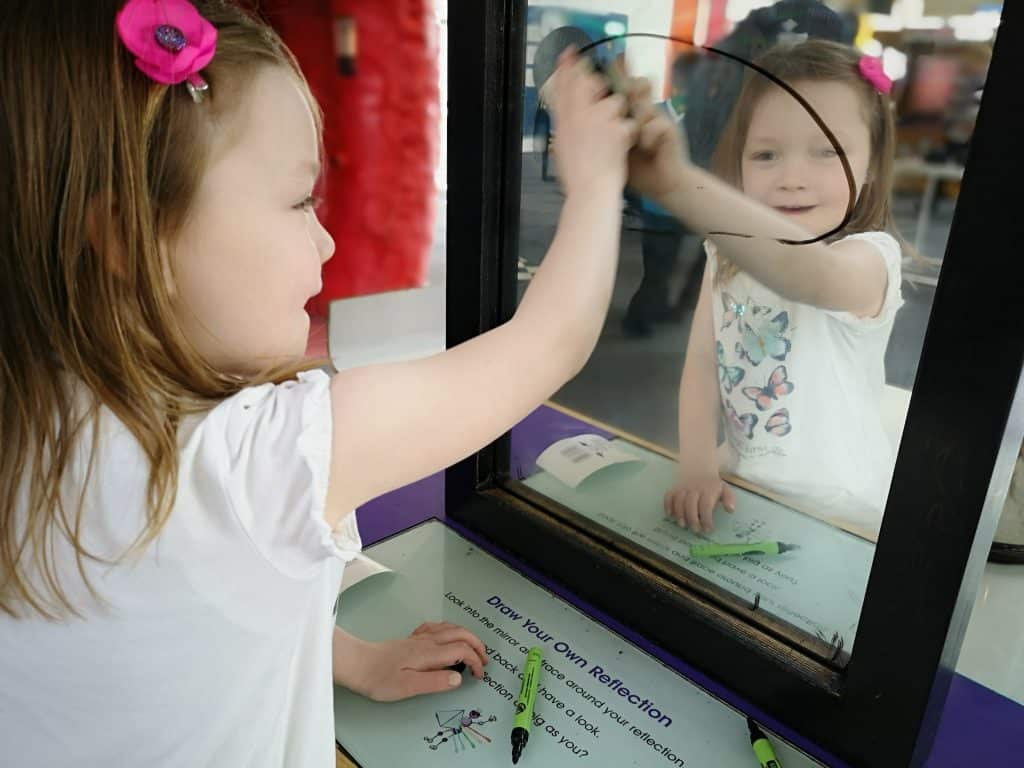 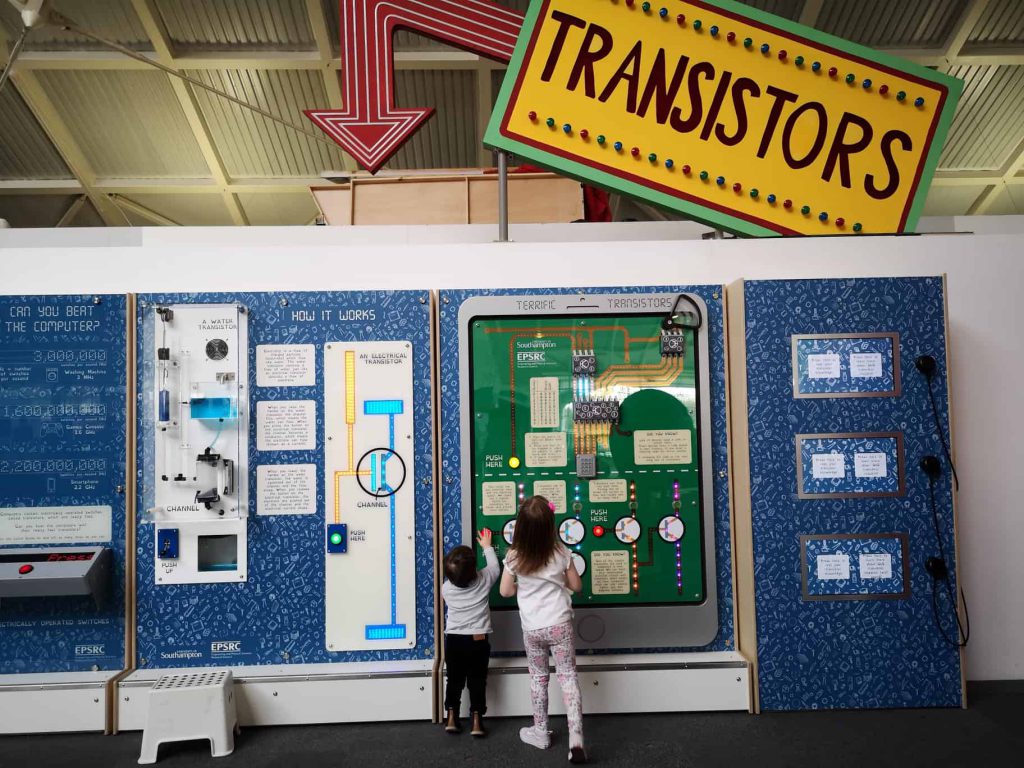 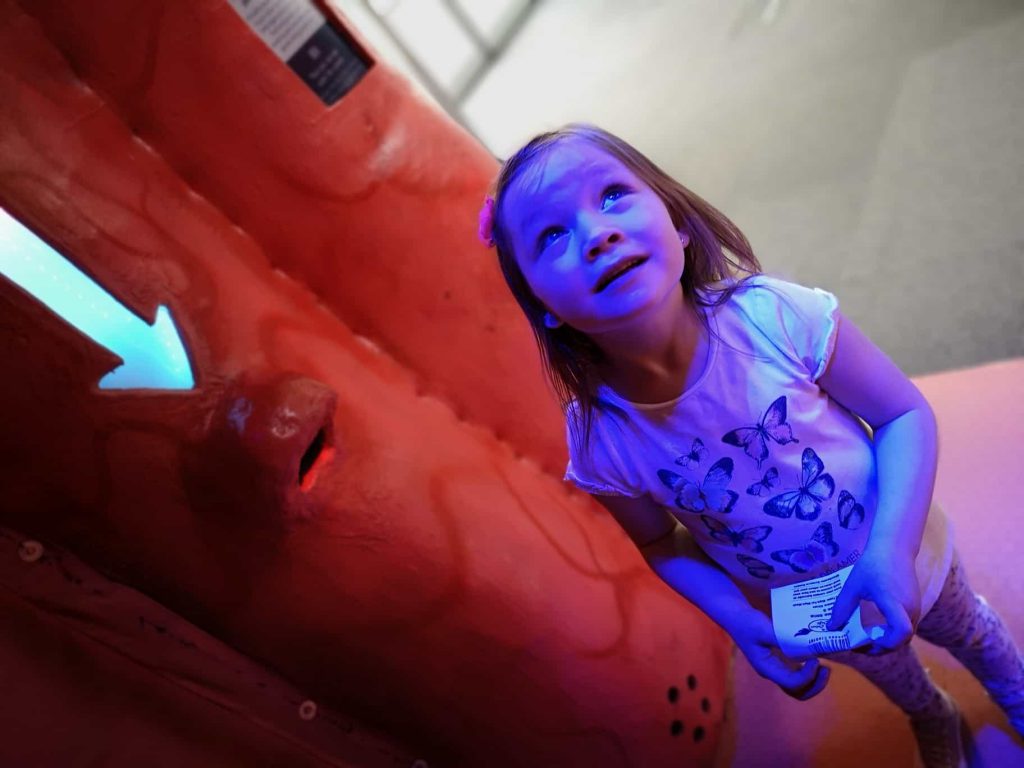 After our walk through the colon, we were lucky enough to get involved with a live science experiment at a little table situated within the centre, here Sofia and Arlo watched and got hands on making planets and clouds with water, shaving foam and food colouring (we made Jupiter and learnt it was red), we then did an erupting volcano with washing up liquid, vinegar, food colouring and the key ingredient – bicarbonate of soda. The kids absolutely loved it! 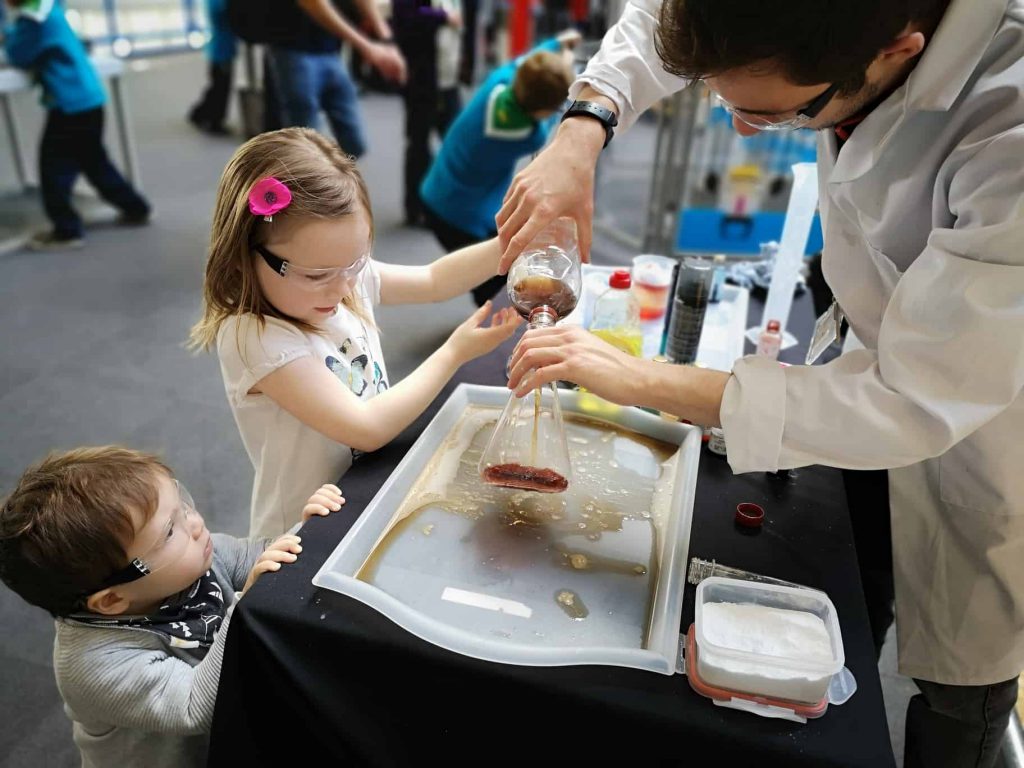 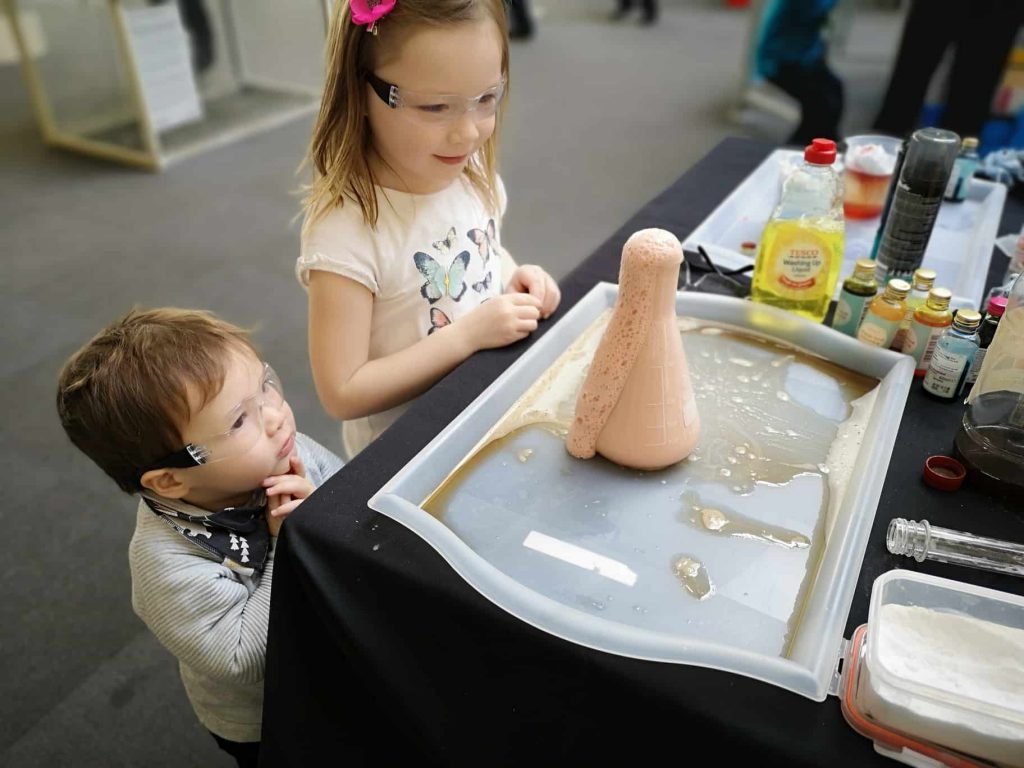 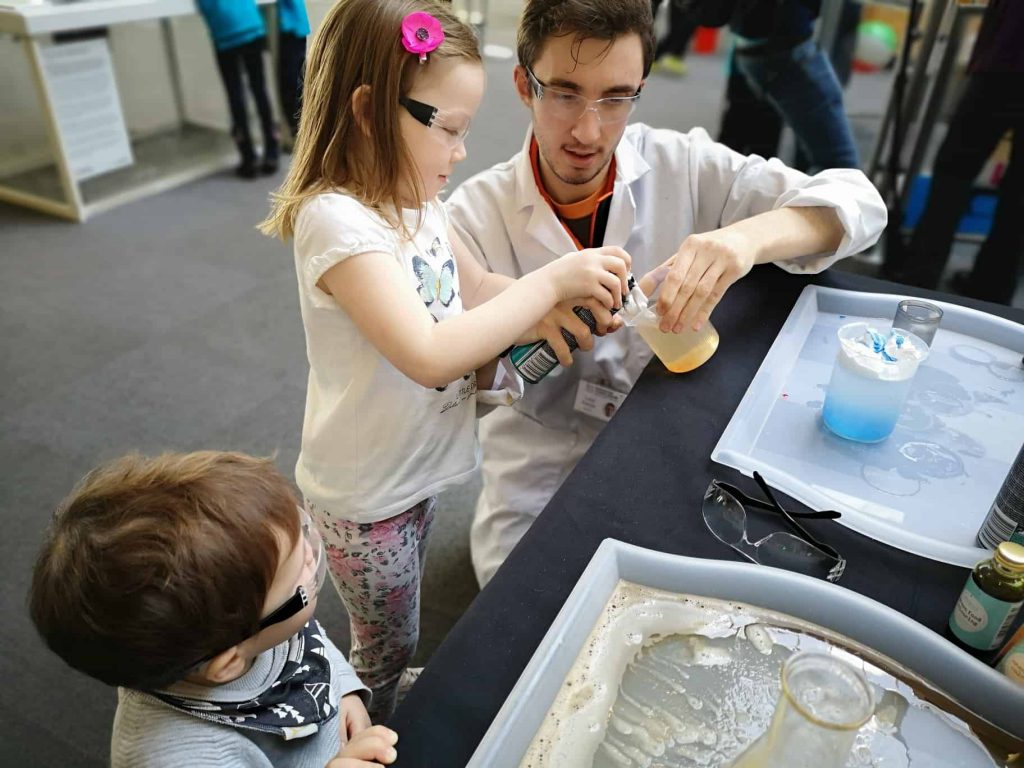 I had pre-booked a show at the Planetarium (£3.50 if also going into the centre | 2 years and under – free) , opting for the presenter-led ‘Flight of the Universe’ for the 11.30 ‘chatterbox’ viewing and so with the announcement that we needed to make our way to the Planetarium we headed over.
The Planetarium is stunning! A state-of-the-art 360 degrees cinema screen with the comfiest seats saw us fly through the solar system, with audience participation guessing which animals the star constellations represented – who would have thought bears, horses and ladies were up in the sky above us. I found this so interesting and was really getting in to it; however I soon realised why the Planetarium doesn’t recommend shows for the under 5’s and so after 20 minutes I decided to take the dastardly duo out and leave the rest of the auditorium in peace. 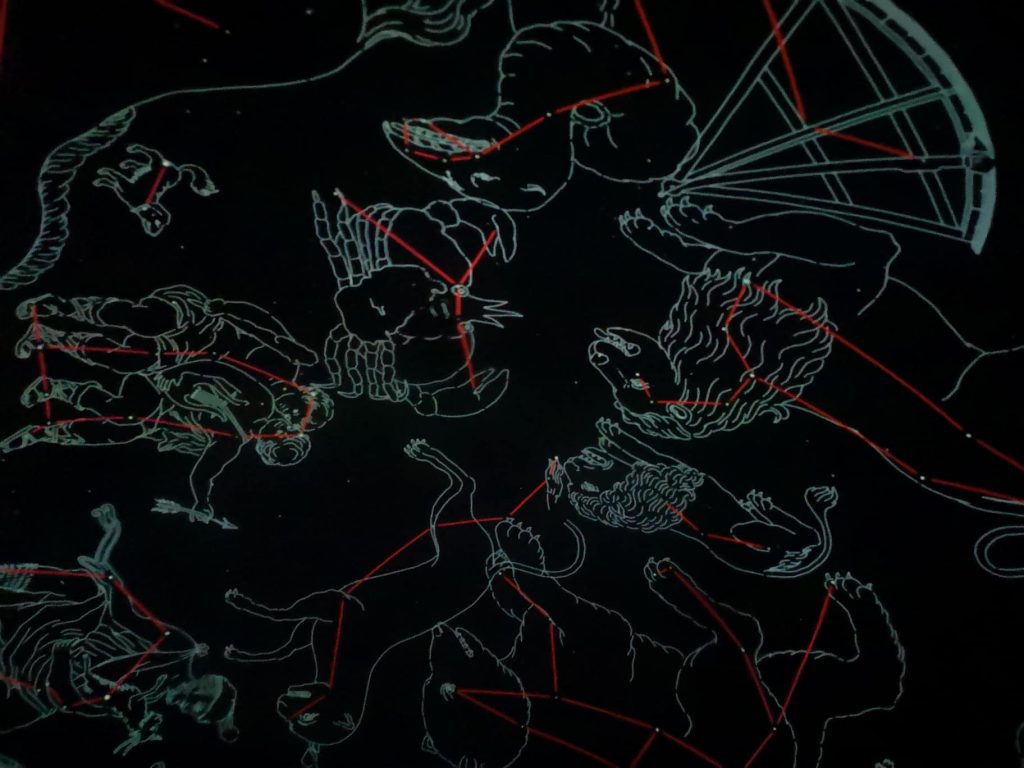 After we made our hasty exit we decided to go down to the lower level and find somewhere to have lunch before we headed to the Live DIY science show that I had pre-booked for 1pm (this is free, but booking advised) – we took the lift down to the lower deck and I was pleased to see there were lots of picnic tables which was a really nice touch; I hate those places who make it hard for you to bring your own lunches, almost forcing you to go and eat at their onsite cafe. None of that here! They even provide bottles of spray and clean clothes to wipe the tables down before and after – for a germphobe like me, this put a smile on my face.
As well as picnic tables, there’s lots more to see and do down here. I particularly liked tucking into our picnic whilst watching excited groups of kids spinning the ‘wheel’ as fast as they could to get the water spiralling in one of the stations; it was here that it dawned on me how lovely it was to see kids working together to get stuck in and ‘make things work’ rather than just sitting on rides like many of the other days out that we go on!
Our favourite bits down here were the wonky floor ‘littlebigroom’ – the kids thought this was hilarious (Arlo laughed so hard I’m pretty sure he did an extra wee in his nappy), the air cannon and the seats with the K’Nex tables which was a welcome break and a peaceful distraction for me. The kids were immersed in making for at least 20 minutes – which for them, is an eternity. 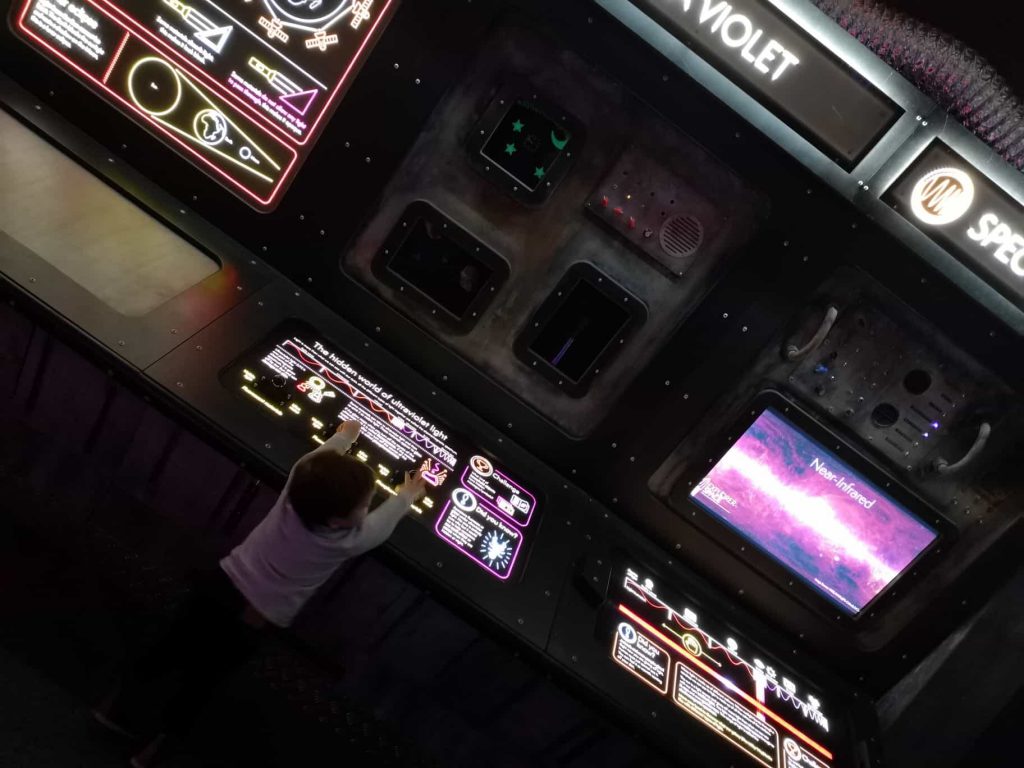 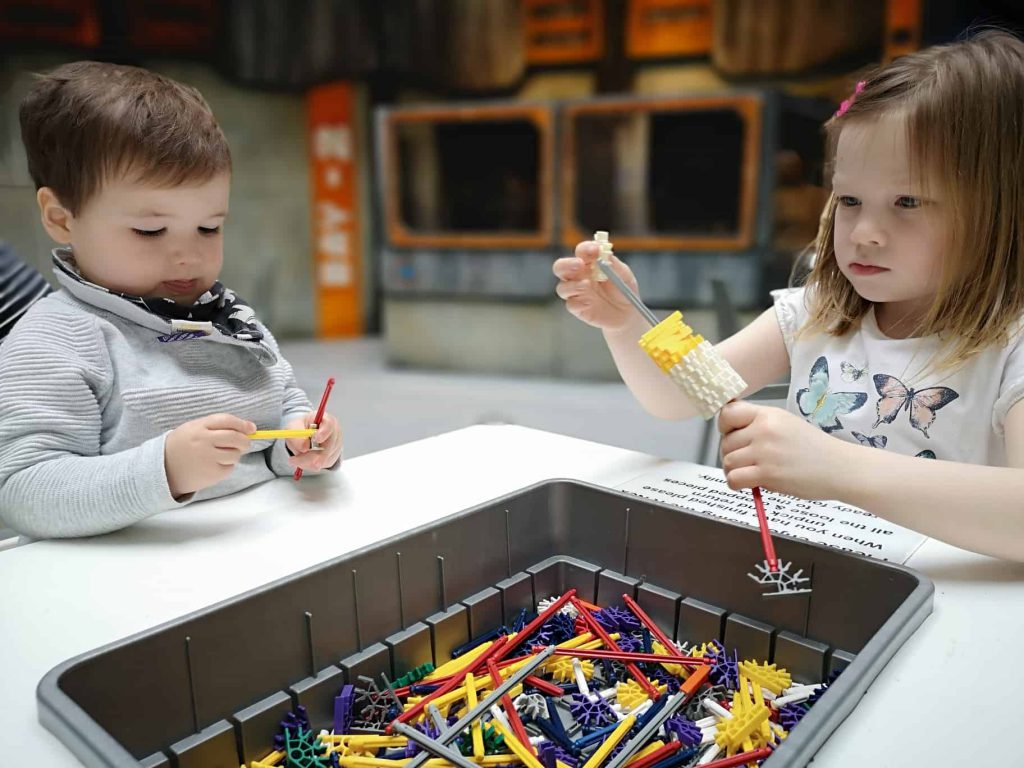 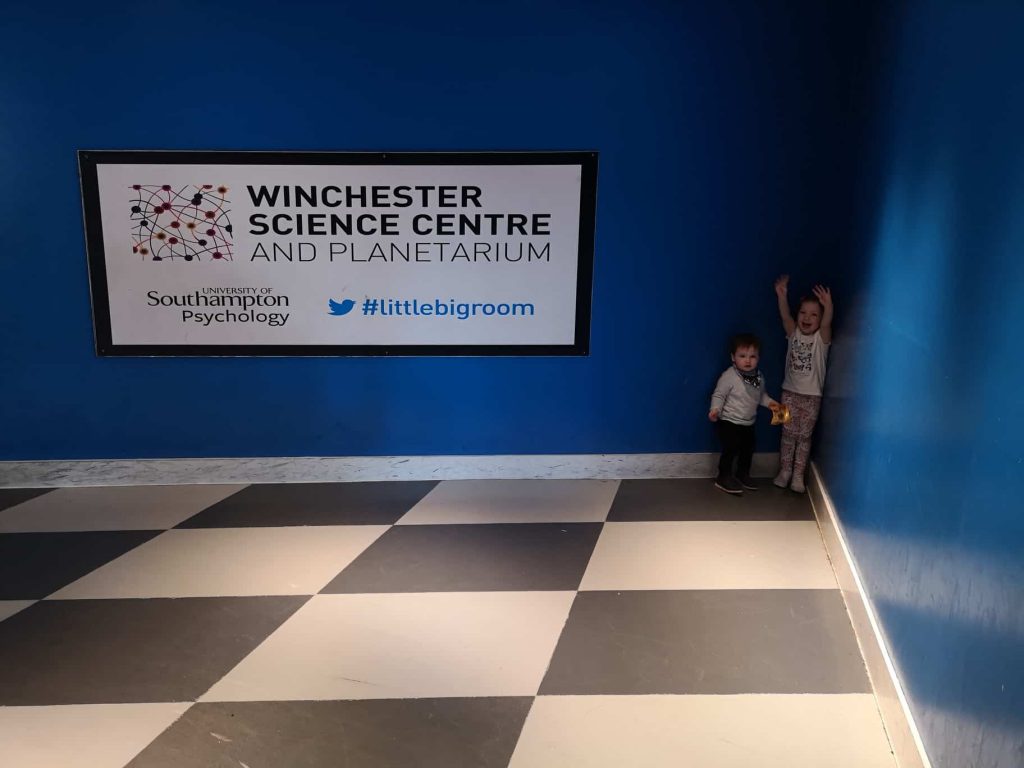 After this, we headed to the DIY science show which was a 20-30 minute show with a presenter on the stage, there were rows of seats to sit on but kids were welcome to sit at the front ‘behind the white line’ if they wanted to get a bit more up close and amongst the action.
Here they learnt about different volumes of coloured water producing different sounds (you can play a tune with them if you get the ‘measures’ right!), the kids had some interaction in creating static from balloons to see their hair sticking up before being invited to stand inside a giant bubble; that was pretty cool! 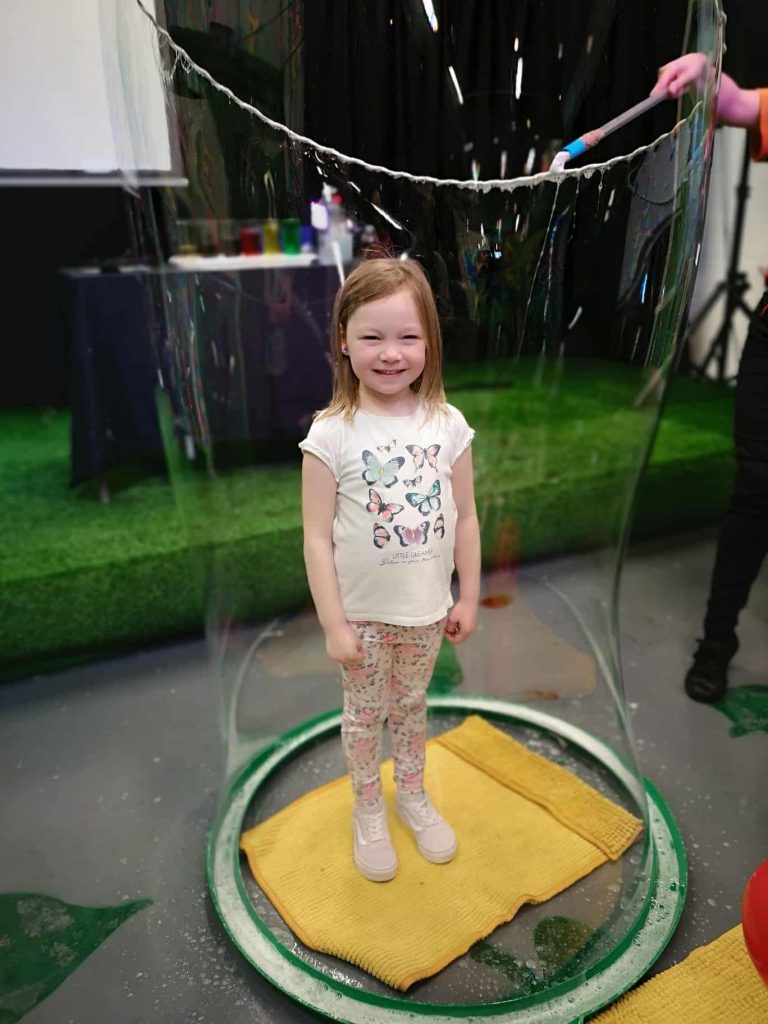 After this, we headed back upstairs for another go round The Colon Cafe (!) before a bit of crafting in the Invention Studio – we made fortune tellers and coloured in star constellations. Sofia’s attention soon wore off from this though as she discovered the flying parachuters and spent a good 10 minutes flying them up through the air chute.
It’s no secret that I’m a bit of a clean hand freak and my anxieties set in with there being so much ‘hand action’ required for a lot of the equipment, however I did relax somewhat when I saw hand sanitisers dotted around the place…and people using them!
There were lots of groups at the centre when we were there; birthday parties and scouts/beaver groups – however, by 2pm it had really emptied out and the wait for certain things were non-existent, so the kids got to run freely from bit to bit and we went round and did most things again.
Winchester Science Centre is open from 10am-4pm (5pm on weekends and bank holidays) and is £13.20 if paying on the door (with donation added) but if you book more than 3 days before you will receive 25% off – under 3’s go free. It’s a really great value, informative and fun day out for adults and kids alike – we highly recommend it and will definitely be returning soon!
The Easter Holidays will see a special ‘The Science of Sweets’ theme which is running from 5-23 April 2019.

Have you ever visited the centre? What are your must-see and do’s? 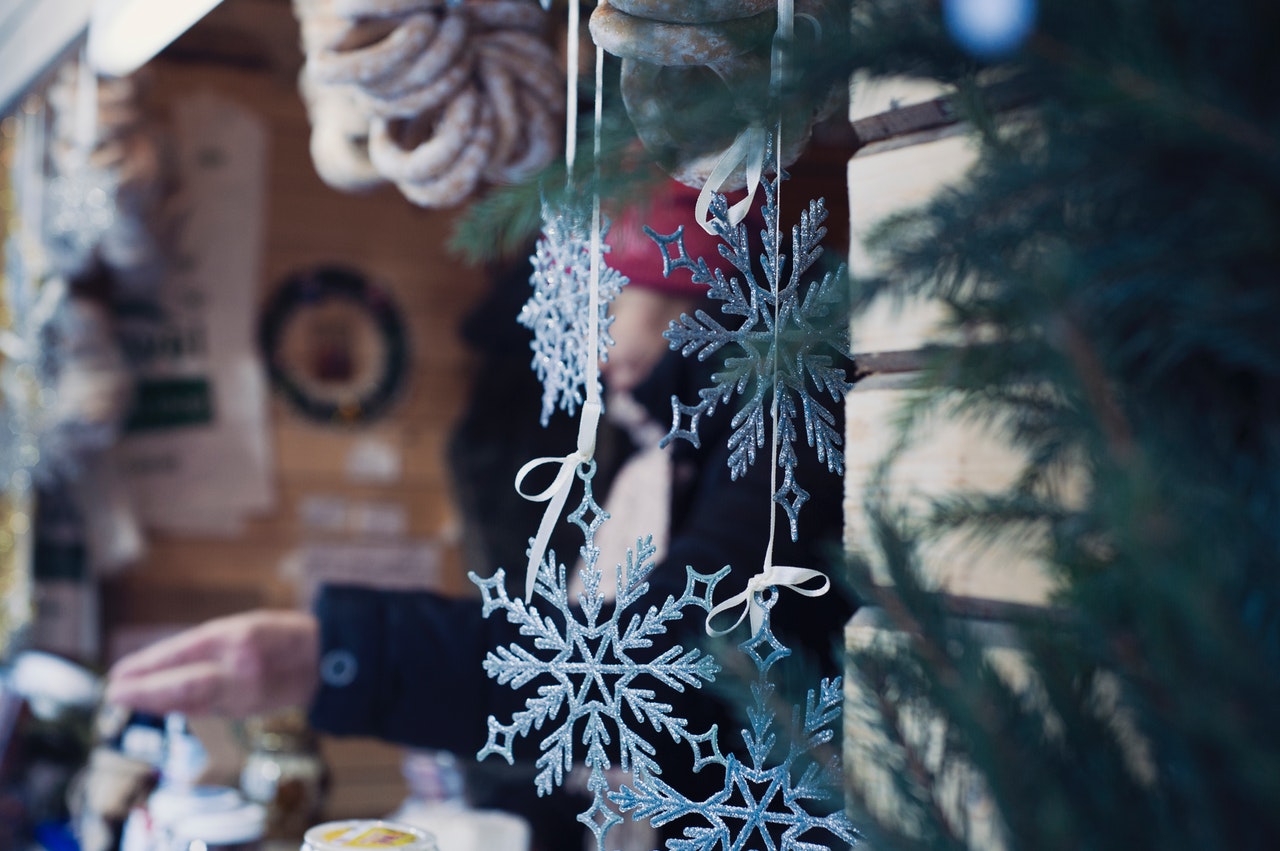