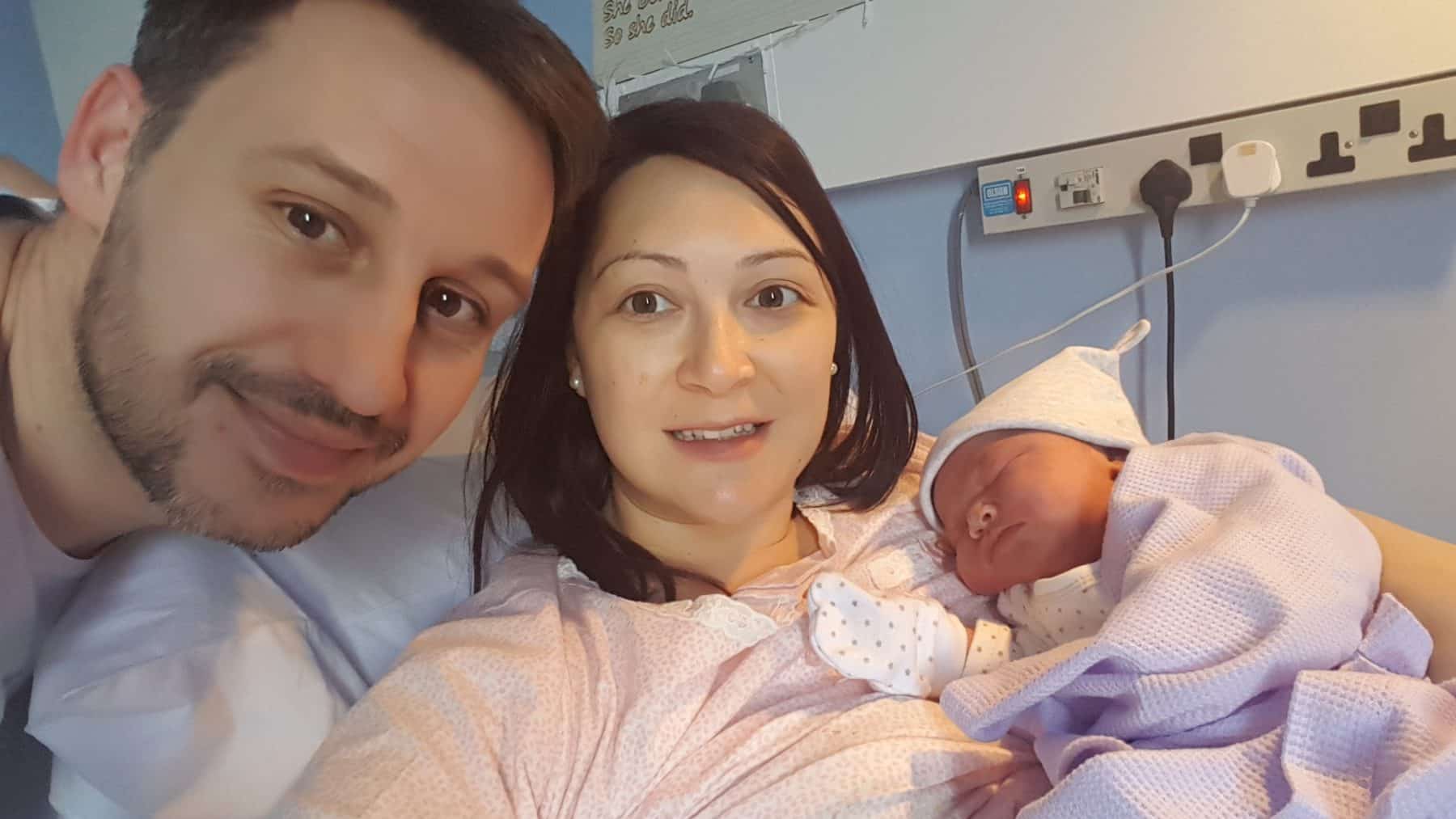 My pregnancy with Arlo was pretty smooth sailing, I started showing around 10 weeks and I felt my very first flutter at 13 weeks in the Co-0p service station – I didn’t feel it again for a while so it could have just been wind. Knowing me, it probably was.

I wasn’t worried about labour, but I was worried about the logistics of labour starting and what we’d do with Sofia –  I was petrified that I’d be giving birth en-route as I’d heard second babies came quick! Sofia’s birth was a little odd as I was dilating and not contracting so I worried the same could happen again but quicker. My midwife had also hinted that he may not make his due date so I was on tenterhooks for an early arrival. His due date came and went and I was waddling around so uncomfortably, literally like I had a bowling ball stuck between my legs.
It was Saturday 25th March and I was fed up, we’d been out to Whiteley shopping centre to have a wander and I’d then spent the evening with my swollen cankles up on a chair. I remember going to bed to the news that Cheryl Cole had given birth – she hadn’t even announced she was pregnant and yet she’d even managed to birth a baby. I was even more fed up!
I woke up at 3.30am with a weird sensation but no pain. I went for a wee and came back unable to settle so I woke Stuart up – who sat up instantly then got dressed and said ‘Right, let’s go’, I laughed as I still didn’t know if I was in labour or not, not to mention the fact that we couldn’t go anywhere as Sofia was here.
I remember thinking it was typical that he’d choose that day to make his appearance – my dad had flew to Spain on a jolly boy’s holiday the day before, we’d moved house nine days ago and my mum had never driven over, add to the fact she’s a nervous driver, hates driving in the dark and had to contend with a 45 minute country lane journey, Stuart’s mum was on a night shift and my emergency Plan C friend was ‘out out’. I hung about a bit longer and decided to call mum ‘just incase’. All I was feeling was that I needed a poo – but nothing was coming out.  I called the labour line and asked if I was in labour, I explained that I didn’t really know what contractions felt like but I didn’t feel ‘right’. She asked me heaps of questions – dos anyone else feel like it’s just a test and the weakest sounding wins?
Mum arrived crashing into the olive tree on our drive, whilst Stuart just paced around saying we needed to go. I still wasn’t convinced so we held out until 6.45am when I made the decision to just rock up at labour ward with no phone call test to try and pass. By this time, I was pretty sure I was in labour as I was getting contractions – I sort of wished I wasn’t – as they weren’t that pleasant.
We arrived at 7.15am, right in their shift changeover so they put us in a room and the midwife said she was about to sign off so she’d leave all the assessments down to the one about to come on shift. Stuart and I just paced around floor looking out at the houses thinking how weird it was that houses overlooked the room and what sort of sights they must see.
I was on a midwifery led ward which means no technical bits and bobs everywhere – literally just a room. Once shift change had been done, a lovely midwife introduced herself to us, gave me jam on toast and then left us to it. That was unusual as with Sofia we had two midwifes throughout who never left us.
One real vivid memory was me breathing through contractions whilst Stuart sat casually watching ‘The Andrew Marr’ show – there were some expletives thrown and soon there was no more Andrew Marr show on the tiny screen. Our midwife checked me every known and again and all was progressing nicely, my waters had gone naturally this time, again different from Sofia where there had been broken for me. I was also a lot more mobile this time round.
That same feeling of needing a poo was still hanging around, but it was like I desperately needed one this time, my midwife said to go to the loo but I refused and so she brought me a bedpan. This may be the most undignified moment of my life; squatting on a bedpan balanced on the bed. After trying for my ‘poo’ I felt that burning sensation and realised that in fact it was no poo, but a baby. I asked her to check me again as it was definitely a baby on it’s way. She said she didn’t need to check but I pleaded. I was actually fully dilated but she discovered that my front waters were still intact, it was the hind waters that had gone earlier. She broke those and within seconds I was in push-mode. I gave birth on my knees in my £5 Primark nightie, saying ‘I bet Cheryl Cole didn’t have to do this’. I had gas and air which really helped with regulating my breathing and concentrating on something to get me through the pain surges.
Arlo shot out like a rocket at 12.55pm and was passed to me up between my legs. Now he was one of the ugliest babies I’d ever seen but I felt instant love for this huge headed baby boy. 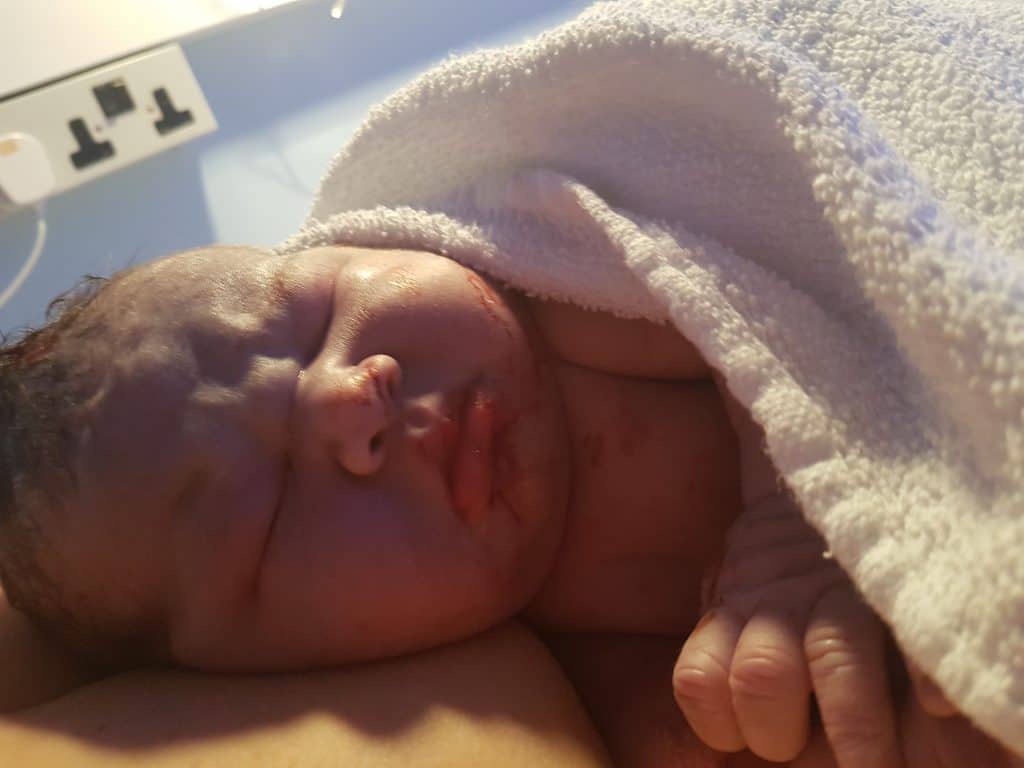 The midwife thought he may have to stay in due to size, but he weighed in at 9lb 2oz so wasn’t over the ‘must stay in’ category. His head was huge, blotchy and his eyes were super swollen and gunky. He reminded me of The Rock – but I just couldn’t bear to put him down! We had the obligatory family selfies and then I had to have a bit of stitch work – looking at his head I don’t know how I got off so lightly.
My mothers day baby had arrived and our new family of four adventure was about to get started. 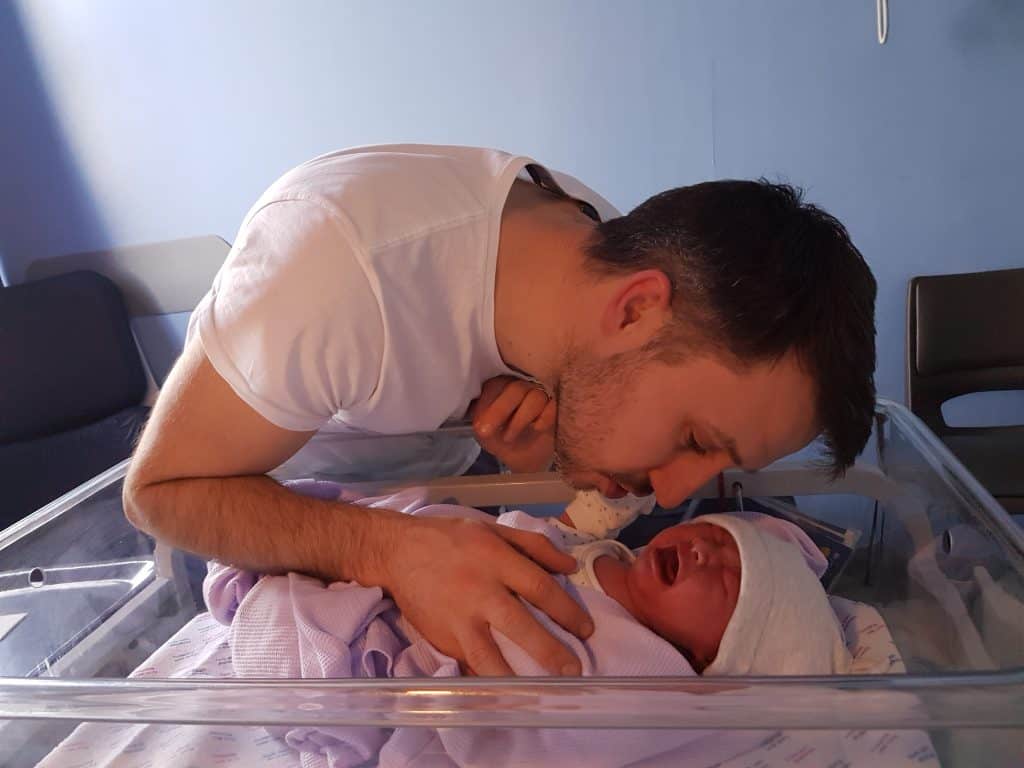 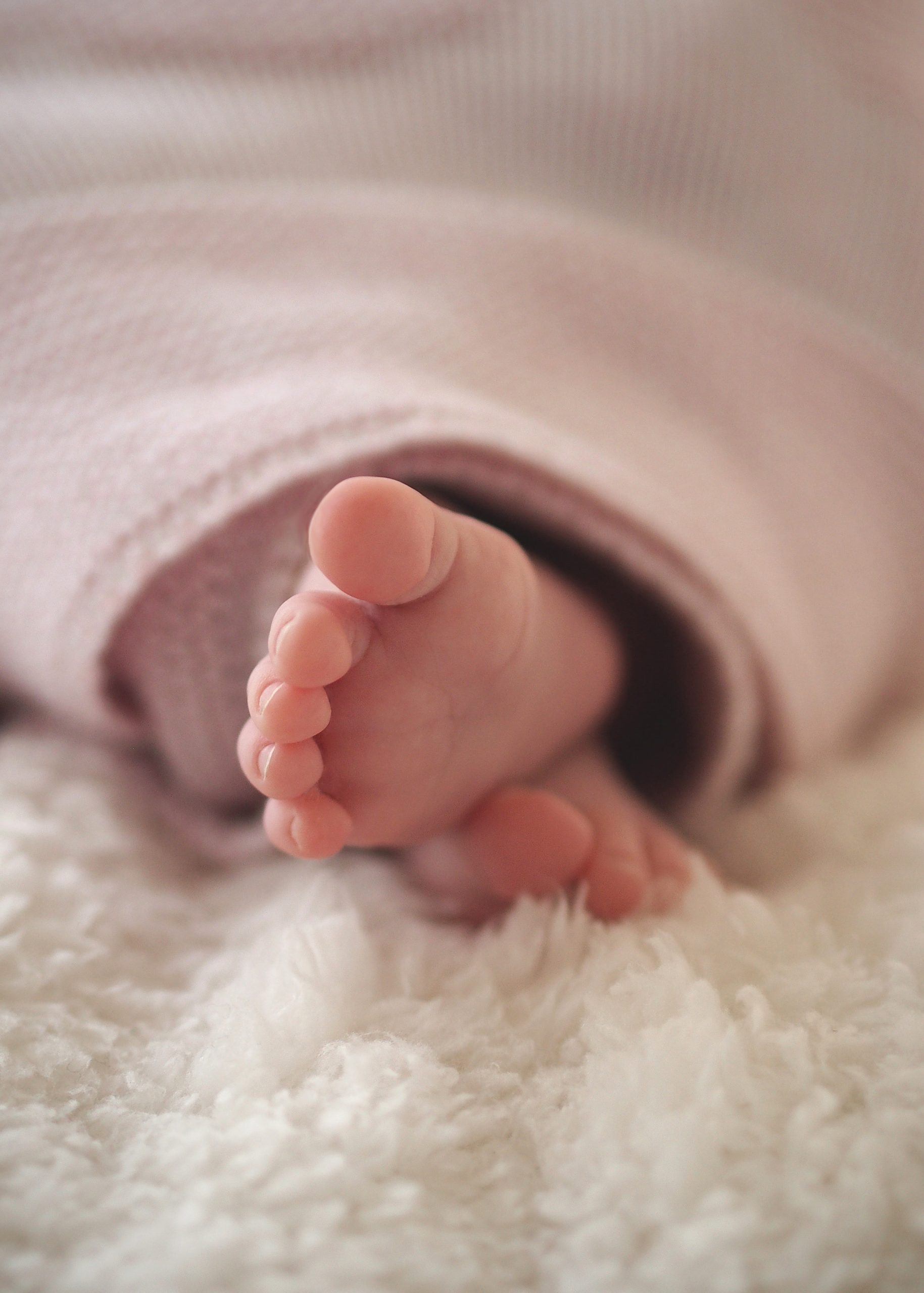 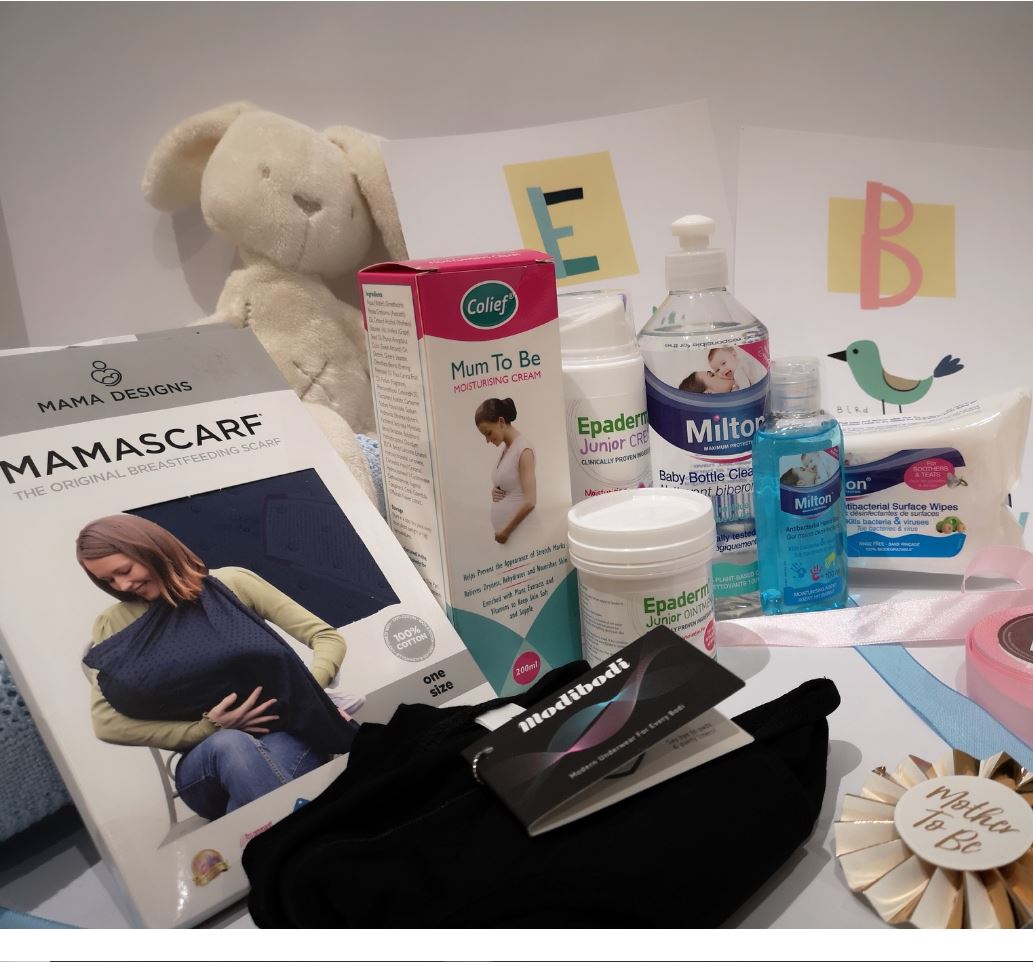